I chose a reputable experienced company to install a manabloc, install a kitchen faucet and add a fixture to the garage. Ray is an excellent plumber, honest, friendly, explained as necessary. We even met the "boss" Kurt who stopped by. I actually had them back a few days later to correct a h/w issue. Both times Ray was the technician and we couldn't be more pleased with Redline. Kim in the office has a great laugh and is upbeat and efficient. Very professional plumbers. Thank you guys for a job well done. Lois and larry

Ray from Redline plumbing arrived to the home that I'm renting. Should I continue to refer to as "the home" or "my home?" I'm not so sure anymore as I had a terrible encounter with Ray. I kindly asked him to remove his shoes. He rudely stated, "No? I have to leave them on because of company policy."  I completely understood as I also didn't want him to get hurt.  I offered him shoe coverings to avoid getting the inside of this townhome dirty with his shoes.  I've always had people wear shoe booties when they entered my home.  Not once was I rude about it and I remained professional and friendly during our entire encounter. He appeared very irate.  He stated he had shoe booties in the truck and I said okay that's fine.  Ray stated, "My shoes aren't even dirty, and if I get hurt, YOU will be liable. You're JUST a renter here."  He said that with lots of emphasis.  He stated, "You don't even have home insurance."   That was the most inappropriate response I've ever heard.  I told him, "Well I don't want the inside of my home to get dirty. Yes I'm just a renter and I actually do have home insurance but it shouldn't matter if I'm just renting." As he was putting on his booties, he was ranting on again about how he can get hurt and I will be liable.  He was beginning to intimidate me and made me feel extremely uncomfortable.  I told him he does not have to be rude about it.  Ray seemed very apathetic, he was creating more tension as he seemed even more irate.  He walked inside the home in the living room and I immediately felt his intense tension.  I felt very threatened by Ray.  I asked him to please leave because he was making me feel uncomfortable.  He stated, "Fine.” I reached out to my property manager and also Redline Plumbing regarding this matter momentarily after. Kurt, manager from Redline Plumbing seemed professional over the phone, he asked if I will be home today and offered to send someone else out today or if they want to come another day.  Kurt stated he knew Ray for 20 years and it does not seem like him.  I told him well that's what just happened and it shouldn't matter if I'm a renter or owner to Ray. Based on Ray's statements about being, "Just a renter," it was pretty obvious he was discriminating against me and treating me unfairly just because I was renting. I've never encountered anything like this before. I'm a responsible person that pay my dues on time, I'm very respectful of my and other peoples properties. I reached out to my property manager for assistance as this home was smelling like fecal matter, source was from the master bathroom drain and also the lack of hot water.  Not habitable and it is very unhealthy. I've had great and friendly interactions with everyone so and also the handyman that came by a while back to fix other issues.  It was just this one incident with Ray from Redline Plumbing that made it a very uncomfortable and unpleasant experience for me.  I thought for a few seconds if I should just let him stay to work on the plumbing issues, but I just couldn't bear to have him in here any longer. Plumbers generally make good money but who would want to work with people like him? I know I'm not paying for this as my property manager/owner of property is taking care of the costs, but the fact of the matter is that I'm getting issues addressed and in no way I'm intentionally causing things to go wrong. I, too have a life as I value my time and have other things to do other than have random people come here. I respect everyones role, esp people that come to fix things because they're experts at it. I don't know if Ray was just having a bad day, dismissive towards women, and/or just had bad experiences with other renters and categorized me as one of them. Nevertheless, this shouldn't have happened. Unprofessional. Very negative demeanor with such a horrible attitude. I would not be surprised if he treated most customers (renters/owners) this way. He needs some kind of remediation, discipline, quit, or simply fire him if he hates his life so much.

I had a hot water leak line. Redline Plumbing was recommended. I had to have the hot water re-routed. It took two days. At first, I was happy with what was done but upon closer inspection there were problems. I did not pay extra for the repair of the drywall that they had to cut into. They did not do a clean job of cutting out the drywall, so the repair has not been easy. Before the work, my A/C was working but after they had finished their work (they had to re-route through the attic) my A/C wasn't working. I was not getting any cool air. It was discovered that the duct was damaged near the area of the pipe re-routing. When I called the company, the workers claimed that it was damaged before and forgot to tell me about it. I still maintained that it was working before they did the work, they were the only ones in the attic and it is now not working. The Service Manager sent an A/C guy out and he talked to the Service Manager while he was in the attic. Later on, I received a call from the Service Manager that there was still dust on the duct work, so his guys didn't damage it and they will not be paying for the repair to the damaged duct. I stated, again, that the A/C was working before, the workers were the only ones up there and it's not working now. The Service Manager was not going to do anything about it. So, I paid for the parts and had the new duct installed. When looking at the damaged duct, you can see that there was NOT any dust on the damaged area but dust on the rest of the duct. Not happy with this type of service. I recommend taking pictures of areas that are not visible to you while they are working.

I was recommended Redline Plumbing by a good friend who never lets me down. I contacted Ray C to do a plumbing leak detection since my Water Bill keeps coming in extremely high. He thoroughly inspected and tested the main coming from the meter, the meter itself, landscaping irrigation, etc. He was forthcoming about the inspection and recommended that I have the city test the meter. Going forward, I will use Redline Plumbing and recommend to all my friends/family. 5 Stars isn't enough.

This is the 4th time I have called on Redline Plumbing to repair and replace outdated equipment in my aging home. The professionalism shown each visit makes my choice of their services the smartest decision I've made living in Las Vegas. I have used part-timers and handymen with true regret. Thank you Redline, especially Jesus G for service replacing my reverse osmosis today. 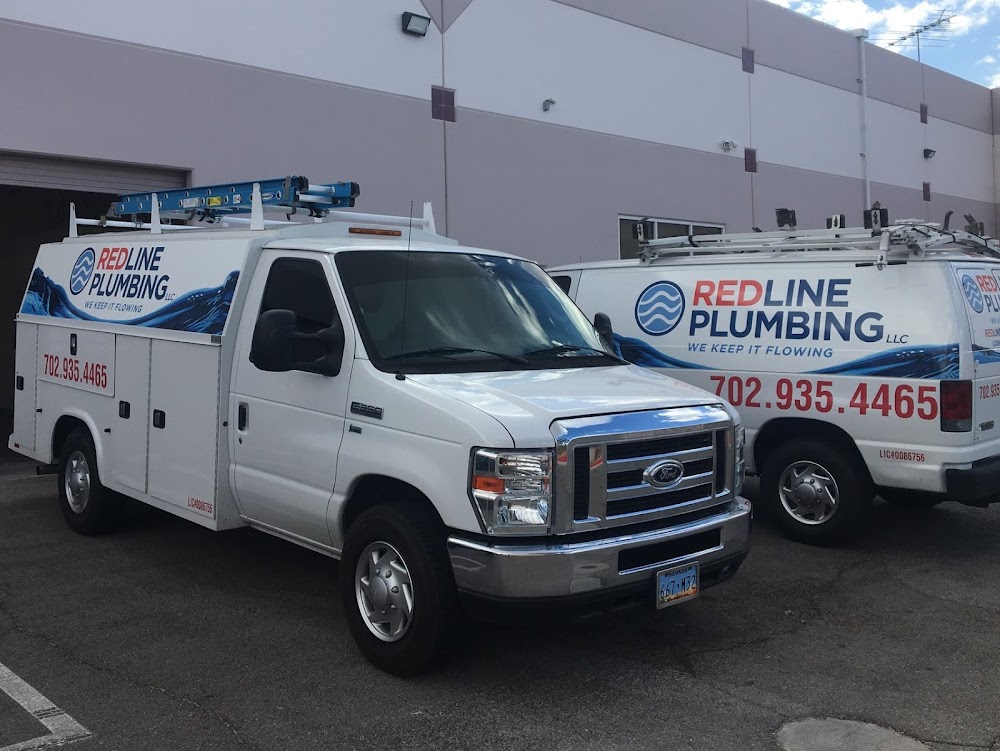