After sitting down with multiple solar sales people I decided I wanted to give these guys a try because of their great reviews. Sales guy that came out didn't really have much personality to be honest. He was not engaging, he did not offer me anything, he did not try to make any concessions. Despite that, I decided to go with them because they had good reviews. Pretty much the only response I ever got out of the sales guy was "sounds good" after the loan has been approved the process was long. Not because it's the process but because they didn't do anything to move it along. It took them over a week to send me the loan application after I said I was going to go ahead with the solar. Anyways, I ended up going with a different company for a bigger system and a cheaper rate. At that point they tried to do some price matching but I had already had quotes from multiple companies and they had not came down one penny. I'm happy in the direction that I went. Be careful and shop around. There are plenty of good companies out there that won't charge you as much

i first was going to go with Tesla. But after doing further research and looking at reviews online, i decided to go with Sol-Up. I'm glad i did. The professionalism, fast and friendly service made this process all the worth it. YES, i am paying a little more for solar panels, but you get what you pay for, and i know that it's being done correctly. The whole process took about 2 months, from sending off my NV Energy statements to Sol-Up, to the day NV Energy came out to swap out the meter. Thank you for making the process stress free, and hope this review helps others, as other reviews helped me.

Sol-up made the entire set up of our solar a very easy and quick experience. They were very responsive to any questions I had and consistently followed up with NVENERGY I highly recommend them. A special shout out to Zack Helms. Thanks Zack for all your help!

We shopped around for solar, but ultimately chose Sol-Up. They provided competitive pricing, excellent product backed by a solid warranty, all work done by Sol-Up employees not subcontractors, they always got back to me quickly, and they were very helpful and answered all my questions patiently and thoroughly even though I can ask a lot of questions. I always felt like they were being totally upfront and honest about everything, and so far I was right. They never tried to upsell me on anything, or talked trash about their competitors. They are also a southern Nevada company, so are local, know our conditions, and choose their installation equipment for our excessive summer heat, which can actually reduce efficiency without an inverter that can handle the heat better. We are in Boulder City, which is not a part of NV Energy, so we were a bit of a different animal for them, but they were familiar with what Boulder City requires and were able to navigate through our bureaucracy just fine. They were on top of everything, responding to progress through the paperwork within hours to keep things moving forward. They included us in all correspondence with the City, so we knew where we were in the process at all times. Excellent communication throughout the whole thing, even after installation and turning it on. We turned it on about three weeks, ago, and I just got a call from them to make sure I understood the warranty, which prompted me to write this review (they did not ask me to). Installation of 11 panels, inverter, bird guards (included in price), etc. in blistering heat took under 4 hours. The crew was on-time, professional, polite, efficient, and cleaned up after themselves. A painter even came by later to make the box colors match our house. Our panels are working great, we are continually putting power onto the grid even with our a/c cranked. Financing was the only drawback. They use an outside financier for their financing, which charges outrageous fees. I never got that far with other solar companies to see how they do it, but I suspect almost all of them go the outside-financing route as well. We chucked that option and found our own financing. I highly recommend Sol-Up.

My wife and I decided to purchase a solar and interviewed 5 companies. Based on price, Sol-up wasn't the cheapest but close. After looking at the Panasonic panels and warranty production we decided to go with them. One big plus for me was their contract was very simple and straight forward. They do their own installs so no other companies to deal with if we have problems. We signed the contract in November, and were told the installation date would be in early January. They gave us a date and showed up on the date we were told. After 2 days the system was installed and just had to wait for NV Energy to inspect which is what took the longest. 1 month after install NV Energy showed up and installed a new meter. I got a call within 10 minutes of NV energy leaving from Sol-up asking if I was comfortable with being walked through turning the system on. It was easy and after about 1/2 hour the system was producing and communicating with the Solar Edge app. They kept contact all along the way of the process and made sure that we knew the next step to come so no surprises. We would recommend Sol - Up to anyone looking to install a Solar Panel System. 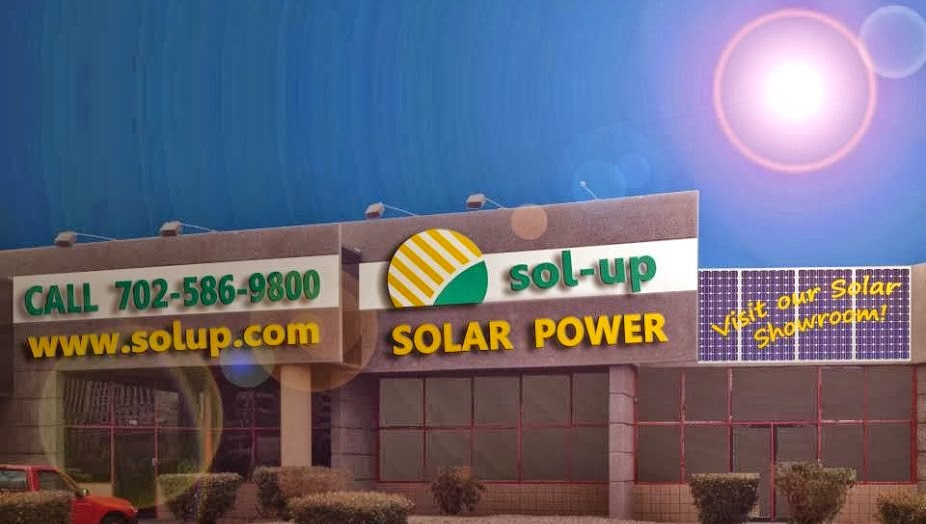